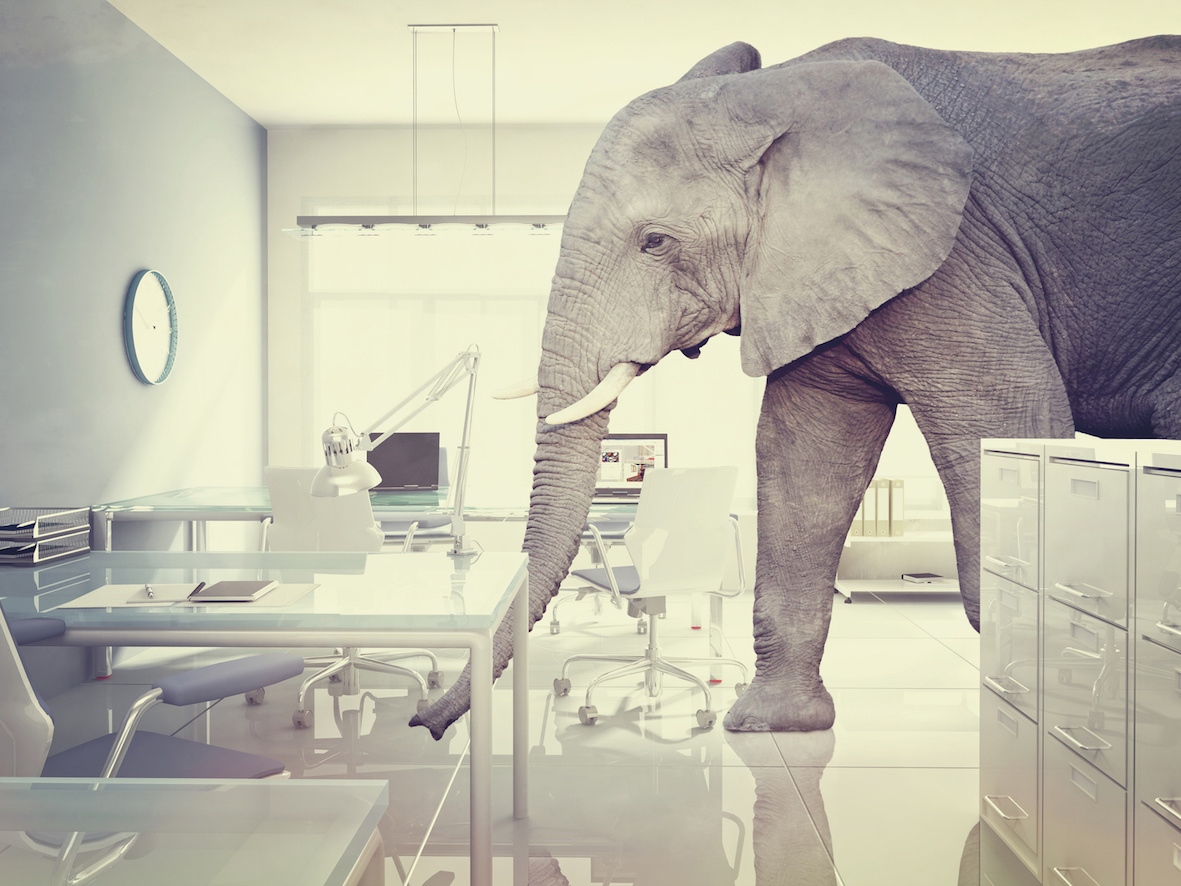 Is the elephant in the room destroying your IT projects?

Commentators and analysts spend countless hours debating the reasons for IT project and migration failures, but the main problem is plain to see.  Why do we ignore the obvious, and what can be done to reverse the pattern of costly IT project failures?

According to this article, more than half of IT professionals have been involved with a failed technology project. The problem is not getting better either, with the failure rate identical to the original study conducted three years prior.

This is obviously a huge problem, wasting millions of pounds, countless lost hours and undermining the confidence that business has in IT.  Another article, also from CIO.com, does a good job explaining the scale of the challenge, listing a number of technological and organisational problems that cause IT projects to fail.

These are all valid points and every IT project manager would be wise to read the article.  IT is clearly a multifaceted, complex beast which must be skilfully managed to deliver successful outcomes, and so looking at every angle and pitfall that can cause a problem is a prudent strategy.

But there is one thing, the obvious thing, that many IT professionals ignore.  Even though it’s the elephant in the room staring them in the face:

The dedication and skill of people, and the communication between people, ultimately makes or breaks an IT project.  This isn’t an IT-specific fact, it applies to any business function.  All businesses are defined by the quality of their people and how they act on a daily basis.  IT is no different.  It is the people who will overcome the problems identified in the CIO article.  It is people who will go the extra mile to ensure the technology problems are fixed and systems are correctly configured.  Similarly, it is bad management, poor relationships, and miscommunication that doom IT projects to failure.

Why not address the obvious?
If it’s so obvious that a failure to motivate, manage and deploy people correctly is the main reasons why so many IT projects fail, why doesn’t IT address it?  Finding the answer requires us to consider the very nature of IT as a profession. ‘People’ issues are seen as an intangible element of the IT process, and intangibles don’t suit the mindset of many IT professionals.

It may be a reductive description, but IT professionals are typically left-sided thinkers who like structure, order, and predictability.  People don’t work this way.  In fact, they are often the antithesis of these traits, displaying randomness, stubbornness and refusal to conform to logical behaviour.  IT likes documented processes, and people are ill-suited to this approach.

It’s why best practice frameworks such as ITIL pay lip service to people, but ultimately focus on processes.  This is understandable.  You can’t document an exact procedure which motivates a programmer to troubleshoot code, or a project manager to speak to the right people before pushing ahead with plans.  But you can build a process for managing an IT asset or tackling a system failure, and this is why IT currently falls down.  It takes the easy option by trying to distill all of IT into processes, and continually ignores the elephant trampling on its best-laid plans.

So, must we simply accept that people problems will continue to plague and undermine IT?  Fortunately not.  Business Relationship Management (BRM) not only acknowledges the importance of people in managing IT, it meets IT people in the middle by creating a structure for dealing with relationships.  Yes, BRM can’t make people treat each other in the right way, but it can show the tangible contribution of people, the value of cooperation and explain how to maintain the correct communication protocol.

Every business would benefit from BRM – I truly believe that.  But they have so far been slow to adopt.  I believe the problem is that it takes a major mental leap for IT professionals to understand something they can’t see, and this means it’s easy to ignore.

What does BRM look like?
I’ve lost count of the number of ‘eureka’ reactions I’ve experienced when I’ve shown IT professionals BRM in action via the Sollertis platform.  This visual representation of BRM takes the concept beyond theory into the realms of believability.  I think this is especially powerful for IT professionals who like to quantify and visualise a theory.  Putting BRM ‘in their hands’, letting people turn it over and look at from various angles is often the moment that fear of the ‘elephant’ starts to dissipate. It’s extremely satisfying to see reactions to our BRM platform, because of how it quickly clarifies and validates the concepts of BRM.  If you haven’t experienced, give us a call and we’ll arrange a demo.

Yes, a BRM system on its own will not fix every ill associated with IT project failure.  Neither will it solidify every idea about managing people and relationships.  But it does offer a very powerful way of structuring something that is crucial to the future of IT, but has been largely ignored because it’s until now been viewed as unmanageable.

IT has ignored the elephant in the room because it hasn’t had a strategy for dealing with it.  BRM is exactly what is needed to face up to the problem and banish the beast once and for all.

The role of automation in the ‘new normal’

An introduction to Webhooks in Cherwell

Any cookies that may not be particularly necessary for the website to function and is used specifically to collect user personal data via analytics, ads, other embedded contents are termed as non-necessary cookies. It is mandatory to procure user consent prior to running these cookies on your website. Any Personal details collected will be collected in accordance with out privacy policy.